Ninth Step is an extension of the Eight Step.

1. Be in Ardhamandala hands held in katakamukha mudra close to the chest.

2. Jump on your toes, while in Ardhamandala hands held straight above your head with Alapadma Mudra. Both the Arms are parallel to each other. Say Tai Yum

3. Then Right leg is stretch out in Alidha, both hands stretch sideways in Alapadma Mudra. Say Tat tat

4. Now take your Left leg Behind the right leg (crossed leg positions). Bend down with both hands parallel to each other nearly touching the floor in Alapadma. Say Tai hi

5. Now Tap the right leg in Ardhamandala position and your body erect at same time. Hands are held close to the chest in Katakamukha mudra. Say Ya ha . For Pictures on the above steps 1-4 see the explanation on Eight step of Natta adavu.

6. After doing the eight step, now stretch your right hand in the front in Alapadama in level with the shoulders, while the left hand placed close to the chest in Katakamukha Mudra. Here shoulders must be in one line. Also stretch your right leg forward in Alidha like the fifth step of Natta Adavu. Say Tai Yum 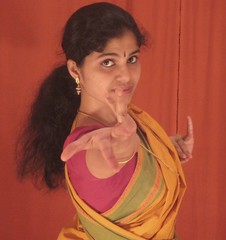 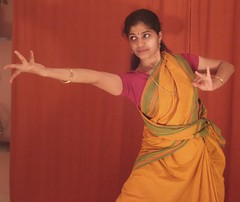 7. In The same position above Tap the left leg that is behind. Say Tat Tat

8. Bring back your right leg and Tap the floor with flat foot. Hand placed close to the chest in Katakamukha Mudra. Say Tai Hi

9. Now in the same position Tap the left foot . Say Ya Ha

Repeat the same with the left leg.

Also refer the video of the Ninth Step