nskrit the creative principal of the universe is called the ‘Brahma’. As the name suggests he is believed to be the creator of the universe and all beings have evolved out of him. Brahma is depicted as red in color with four heads, bearded faces, and four arms. His hands hold a kamandalu (a pot), his bow or a rosary, a sacrificial ladle, and the Vedas. Brahma is sometimes depicted as sitting on a lotus that emerges out of the navel of a supreme being Narayana. The four Vedas are said to have originated from his heads. Brahma’s vehicle is a divine Swan. This bird is bestowed with a virtue to separate milk and water out their mixture. This can be inferred to the power of discrimination. Brahma’s consort is Devi Saraswati (the goddess of wisdom).

With reference to Dance, Nadikeswara writes 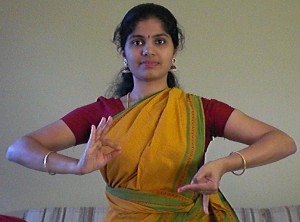