When the middle finger and the ring finger press against the thumb, while the other fingers are held straight we get the Simhamukha Hasta. Simhamukha means Lion -faced. In the Hindu Mythology lord Narashimha Murthy (an incarnation of Vishnu) has the face of a Lion. He is Known as the “Great Protector” of his Devotees . 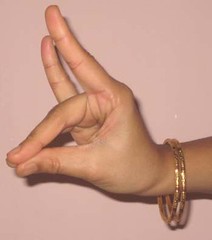 Lets take a look at the viniyoga shloka (uses)

The shloka says that this hasta can be used to denote :