The modern day Bharatanatyam was given the formal shape by these four Nattuvanars (widely known as Tanjaore Bandhu) namely Chinnaiya, Ponaiyah, Sivanandam, Vadivelu. They flourished in the Darbar of the Maratha ruler, Sarfoji-II between A.D 1798 to 1832. Todays Margam (repertoire from Allaripu to Tillana) was also given a face lift by them. Fresh compositions were also brought in the Dance items.

Meenakshi Sundaram Pillai – He was Born On September 22, 1869 in the family of suryakumar Nattuvanar who was a renowned musician and scholar. His wife was the daughter of the great Ponnaiya. He received his initial training under kumaraswamy Nattuvanar who was his aunts son.

Later on in the 1934 he came to madras when invited by Rukmini Devi. She underwent a thorough training under him.

He Died in 1954 leaving a gap which can never be filled up. He was a Modest guru and was addressed as “Tata” by his students. His Style was known as the Pandanallur school of Bharatanatyam. It is known for its Broad sweeping movements, exquisite framing of Teeramanams with beautiful Adavus. 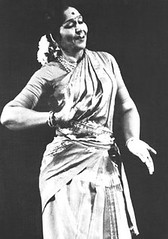 She was looked upon as a child prodigy and a brilliant dancer by Pandits and Vidhwans in those days. She did her Arangetram when she was seven years old in 1925 at kamakshi Amman Temple at kancheepuram. Kandappa was great guru of Bala.

She was known for her enchanting, inimitable and exquisite sancharibhavas in Abhinaya. As a singer of great repute, music seeped through her body and reflected in all her movements.

At the Edinburg Festival Bala was acclaimed as a great dancer on International platform. The tamilnadu goverment and national centre of performing arts has prepared a documentary on her directed by Styajit Ray. Dr Narayan has written a book Balasaraswati published by international cultural centre New Delhi in 1963. 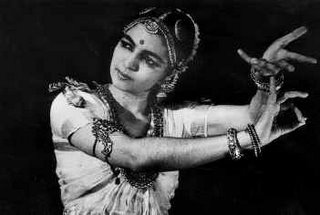 Born in a Brahmin family in Madurai on 28th February 1904. She came from a village called Thiruvayur with rich association of saint Tyagaraja. Her background was full of culture and learning. She got married to Dr. George Arundale in 1920 who was an educationist. With him she traveled Europe giving lectures on Indian culture. In Australia she learned Russian Ballets from a legendary Russian ballerina Anna Pavlova. It was she who advised her to learn Indian Classical dance. So when she came to India She met Pandanallur Meenakshi Sundaram pillai and took lessons from him. She also studied from Gauri amma and Muthukumar.

She brought about a great revolution in the field of Bhartanatyam.

She established the Kalakshetra in training students in the art of bharatanatyam. Kalakshetra laid emphasis on correct movements and thorough training. The art of Nattuvangam is also taught here. Here one learns how to conduct dance and Music in choreography and composition. It has therefore gained reputation as an international dance centre.

Mrinalini Sarabhai-Mrinalini sarabhai was educated in Switzerland and had received a training in dance steps in Dalcroz. 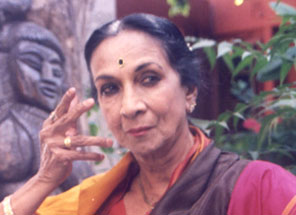 When she came to India she began her training in Bharatanatyam under Muthukumar Pillai. She also studied under Meenakshi Sundaram Pillai, Chokalingam Pillai and Ellapa Pillai.Later got married to Dr Vikram Sarabhai and settled in Ahmedabad. In 1948 she founded the dance academy called “Darpana”for imparting training in Bharatanatyam and other allied arts. She was also a well known choreographer of several dance dramas. Mirnalini has attempted contemporary interpretations of mythologicalthemes. She has received awards from the French archives international Iela and Sangeet Natak Academy for her creative experiments with choreography.