Bharatanatyam is a popular classical dance form of India. Its history goes back a long way. It originates from Tamilnadu, a location in Southern India. Many differences, however, have arisen regarding the art form, starting with simply its name.

The word “Bharatanatyam” itself was established far back in time, even before the composer Purandara Dasa’s time. This can be proven by the reference to Bharatanatyam that Shri Purandara Dasa’s makes in his works. Likewise, many other artists and scholars have hinted at the word much before recent times. Bharatanatyam has, though, been known widely with other names including Sadirattam, Dasiattam, Adal, Koothu, etc. These names have faded over the years, and the art is now commonly known as Bharatanatyam. So what does that term actually mean?

The word is broken down into two separate components: Bharata, obviously referring to Sage Bharata. The other part Natyam, however, has a little more to it than what simply meets the eye. Natyam is today understood to mean dance. But it also is used to mean drama, according to the Natyashastra, a work by none other than Sage Bharata himself. Dance is a component to the collective Natyashastra. Also included are types of drama, costumes, make-up, model work, playhouse structures, and many others.

In addition to simply using written works and performances, the beauty of dance can be seen in the statutes at temples. These sculptures are mainly depicting the Karanas, or dance postures. In Hindu temples, the presiding deity is to be offered sixteen forms of hospitality. Dance is one of these sixteen forms, and Devadasis, or servants of God, would dance at temples for this reason. One main temple containing the aforementioned sculptures is the temple of Chidambaram. This temple is located close to Pondicherry. 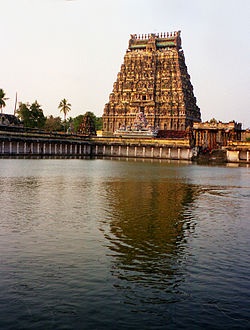 The art form was dissolved due to some complications. Eventually, in later years, some brave Devadasis took to the stage and revived the art form after its complete destruction with the British empire’s ruling. The families and devadasis who had preserved the art form taught it to others, thus spreading it again. Rukmini Devi is widely known as a disciple of the well-known Balasaraswati. This refined form of the art, however, has been brought to us from the Tanjore Quartet. Their names were Chinnayya, Ponnayya, Vadivelu, and Sivanandam. Many of the pieces performed today are their works.

The dance form of Bharatanatyam has been through many difficult times. However, with the strength and support of those who always carried it on, students such as myself are able to enjoy the beautiful experience of learning this art form today. With the support of further generations, this art form will be preserved and will not have to go through the difficulties it faced in reviving itself once. Despite these struggles, Bharatanatyam has become an art form enjoyed by not only Hindus, but those of many religions.

– by Ashraya Ananthanarayanan. She is a high school student from Philadelphia. Ashraya has been an Online Bharatanatyam student since 2009.