Before we move on to the explanation of different Abhinayas I would like to share a popular shloka (poetic verse) in praise of lord Shiva who is said to be the embodiment of these four Abhinayas. The dancing Avatar of Lord Shiva is called the Nataraja (The king of Dance). 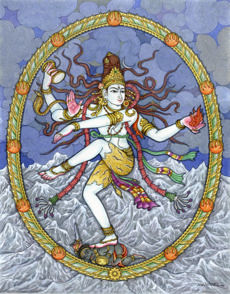 We bow to Him the benevolent One
Whose limbs are the world,
Whose song and poetry are the essence of all language,
Whose costume is the moon and the stars…”

So you can see that the four types of Abhinaya are mentioned in the shloka above. They are:

1.Angika Abhinaya involves expressing the meaning of the song or lyrics using different body parts. In Natyashastra, Angika is a detailed study of all the possible gestures, postures and movements of each and every part of the body. Angikabhinaya uses the total body to express certain meaning. Hasta Abhinaya is an important aspect of Angika. Here body is divided into three major parts – the Anga, Pratyanga and Upanga.

3.There are twelve Upangas or minor parts of the Siras or face which are important for Mukharaga or facial expression. These are – Drsti(eyes), Bhru (eye-brows), Puta (pupil), Kapola (cheek), Nasika (nose), Adhara (jaws), lips, teeth, tongue, chin and face.

2. Vachika Abhinaya is the expression through speech. It is done with the help literature such as poems and dramatics. The Natyashastra writes in detail about the different meters in poetry, strong and week points of poetic writing and diction. It also talks about Figures of speech. Natyshastra says that words spoken during a natya should be full of suggested meaning. The Dialogues delivered or the song sung gives only some ideas which have to be expanded by Angika Abhinaya. Musical notes, play a very important role in creating the mood and emotion of the song. It is also very important in bringing out proper tala while dancing.

In the next post we shall see the other two Abhinayas in Detail.