Hold the thumb of your left hand with the forefingers of right hand in Shikhara hasta. Touch the right thumb to the left palms middle finger. Here we get the shape of a counch ie called as Shankha Hasta. 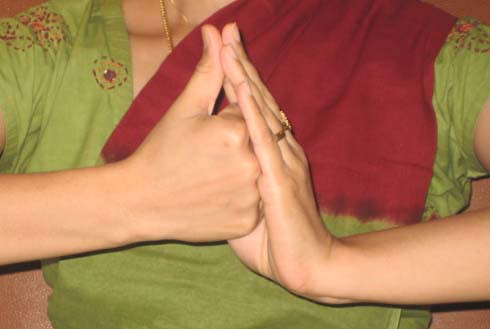 Lets take a look at the Viniyoga shloka

It says that the Shankha mudra is used to denote a counch.

Shankha was also blown in the battlefield as a sign to begin the war. The sound of a Shankha is considered sacred and is also blown in some of the Indian rituals. Shankha has a divine significance in Indian mythology. Lord Vishnu is imagined of having four hands. He is described as holding a Shankha (counch) in his upper left hand.