Tripataaka means “three parts of the flag”. In this Mudra, all the fingers are held straight and close together like the stop sign except for the ring finger which is bent. 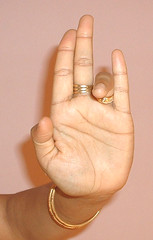 It says Tripataaka is generally used to denote the following:

As we discussed earlier, this Mudra would be used in the Nattu adavu. It is also prominently used in Tirumanam Adavu.